This is a follow up blog to the debate I hosted for @UKPastoralChat on Wednesday 2 May 2018, recorded here. I posted an introductory blog here prior to the event. I am grateful to @MattGovernor for affording me the opportunity to use the #UKPastoralChat platform in this way, and to the many people who gave up their time to participate.

This has proved to be an extremely difficult blog to write. I was quite deliberate in selecting the two questions that I did select. My response to both questions was lengthy and deliberately provocative. In my answers I unequivocally state my personal viewpoint. Maybe political leaning, too? Education and politics is inextricably linked is it not? I think so.

The questions and my answers… 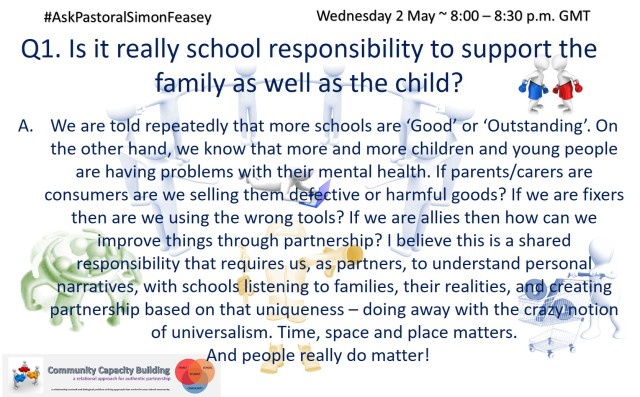 I have reflected on responses given across the thirty plus minutes of ‘chat’, time and time again. I have recorded every interaction here. After much deliberation, I have decided to take a broad view and home in on my perceiving of an underlying angst shared, if nuanced, by all participants. In writing this, the word ‘angst’ came straight to me. I have just paused to ‘Google’ its definition:

a feeling of deep anxiety or dread, typically an unfocused one about the human condition or the state of the world in general.

Given that the platform for this debate was #UKpastoralchat and its focus is wellbeing, I hoped to draw on two issues; 1. the apparent increase (crisis?) in young people struggling with mental health issues, and 2. academic and/or personal growth.

On mental health, there are those who question any idea of crisis, suggesting there is no confirming evidence. I will nail my colours to the mast here by saying that, for me, such a stance brings to mind the story of Thomas and his insistence on seeing and feeling the wounds suffered by Jesus on the cross. I listen to friends, parents/carers and school communities, fellow professionals, and witness the torment felt by so many people (young and old) trying to negotiate their own realities. At the very least, in my view, it is something that calls for immediate attention in our schools, in our communities generally, and in society at large.

To be modern … is to experience personal and social life as a maelstrom, to find one’s world and oneself in perpetual disintegration and renewal, trouble and anguish, ambiguity and contradiction: to be part of a universe in which all that is solid melts into air.
Berman, 1983, p. 8

Overly dramatic? Troubling? Makes you pause for thought though, eh?

I admit to no little nervousness around pulling on data at this point. I find that I am developing an ever increasing – I think, healthy – criticality around Knowledge, Knowers, and Knowledge production.

From Ofsted Data View… more children attend a good or better school now than they did eight years ago. Official… 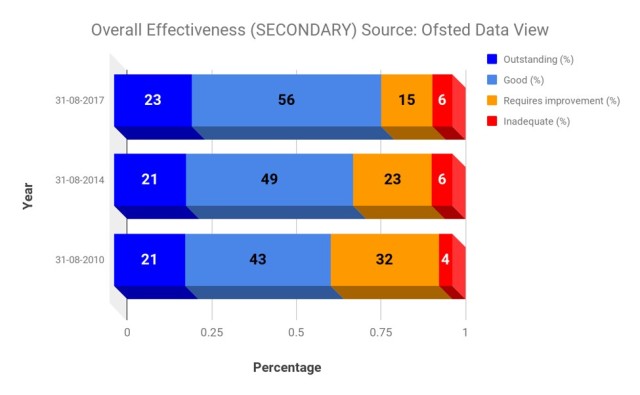 That has got to be good hasn’t it? Is ‘Good’ good? How often do we hear beleaguered colleagues in other schools talk of “the data” as a problem as inspections convert to a second day or because things are not going well and battle lines have been drawn. I raise a question: What weighting, if any, attaches itself to personal rather than academic growth/progress in “the data”? And then, if a leader’s school is judged to be less than good where does their ‘improvement’ focus lie? Indeed, if borderline ‘good’, where does the ‘improvement’ focus lie?

My specific interest and the projected theme of the debate aired on #UKpastoralchat was Family-School-Community partnership and agentic position. I queried this by floating role suggestions such as: parents as consumers? schools as fixers? school and families as allies? partners? friends?

For sure, parents are encouraged to be discerning when ‘selecting’ a school for their children, and are signposted to useful information sources. School Ofsted reports and judgements being one such source. As we well know, of course, parents like to visit the school site itself. My experience, in the schools I have had the privilege to teach and lead in, is that parents/carers are very insightful. My experience in headship is that visiting parents will look you in the eye and seek a sense of your values; all the while looking for assurances, scanning for evidence on the customary tour that what you say stacks up.

On the issue of wellbeing, and mental health in particular… In August 2017, the DfE published Supporting Mental Health in Schools and Colleges, a quantitative survey, with a sample size of 6,907 institutions. They reported on ‘parental engagement’ thus. 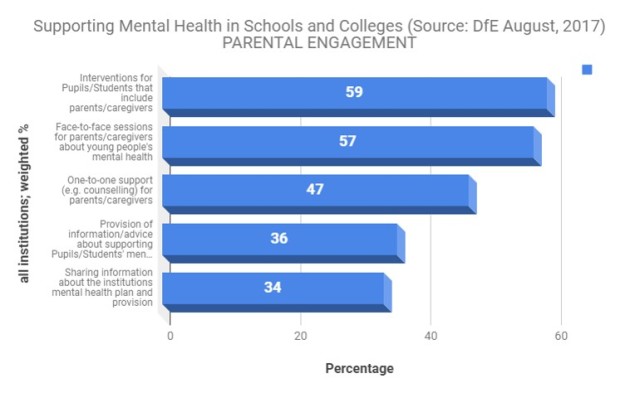 Is this a picture you recognise? Is this your reality?

To mark Children’s Mental Health Week 5-11 February 2018, Place2Be published Providing Mental Health Support in UK Schools with partners, the British Association for Counselling & Psychotherapy (BACP), the UK Council for Psychotherapy (UKCP) and the NAHT. The report aimed to provide a clear view of the challenges and opportunities facing both schools and mental health professionals in the UK today. A survey conducted September-October 2017 included 655 responses from school leaders; almost two thirds from primary settings. The report makes for interesting reading. I am going to pull out two of the findings to illustrate a point here.

I figure that this will ring true with so many of you. I have had those conversations too. Parents in despair. Despairing in the reality of their particular situation. Desperately looking for help in supporting their child. And then finding that they feature as just another family name on an ever lengthening ‘waiting list’; whether that waited for provision be internally or externally provided.

Reports such as the DfE published Supporting Mental Health in Schools and Colleges (above) may well serve a purpose. When I come across them, now, I am often drawn back to the words of Rabbi Dara Frimmer:

We live in an age of surveys. The problem is that surveys don’t work for social change.

Rabbi Frimmer suggests that surveys will never be able to reproduce the feelings and the emotions and the sense of connection that people receive when you sit together and listen to people telling their stories. “Surveys are not stories.” Stories remind us that what we think are deeply personal, private issues are in fact shared public concerns. Imagine, Frimmer says, if we began to work on any of these shared issues together. I explore this issue further here.

I had to do a good bit of trawling to locate anything that remotely tied family-school-community partnership, pupil and young person wellbeing, and government activity/thinking/policy together. I am reminded of the Lamb Inquiry (2009) and Brian Lamb engaging with parents and schools around ‘Special educational needs and parental confidence’. It would seem that Lamb actually did go out and seek stories; lived experience. In a letter to Secretary of State for Children, Schools and Families, Ed Balls, dated April 29th 2009, Lamb wrote, in reference to parents consulted:

… too many reported that the system was not on their side and they had to ‘fight’ or ‘do battle’ with the system to get what they needed for their child.’
Brian Lamb to Ed Balls (2009)

Sound familiar? How does this match your own experience? Some of you, from both sides of the fence? I have been there. I have removed a child of mine from a school and placed them elsewhere. Consider the many voices on Twitter, alone, that speak of battling the system in SEN-related issues, still. Often we hear of family and school fighting that fight together. I have been there too, as a head. Often. Very often. All too often.

Returning to where I started and my detection of the angst that coloured participant contributions and my failure to draw any clarity in the form of neatly packaged and discussed themes shared during #UKpastoralchat. I had anticipated some discussion on agency and roles and that did happen. For me, the angst I speak of belies raw frustration and anxiety around an issue that we school professionals are deeply uncomfortable with and reluctant to shy away from. We are not very good around ‘Whose job is it anyway? type questions are we? Why? Because we never lose sight of that young person in the middle. Further, we find it impossible to deny families the time and support they ask of us.

Drawing on the work of Antonio Gramsci, Grace (1994) has defined complex hope as ‘an optimism of the will that recognises the historical and structural difficulties which need to be overcome’. It seems to me that complex hope needs to be encouraged when, perhaps, naïve and simple hope is what too often dominates when social justice matters get discussed in the education policy arena. Something that I have likely been ‘guilty’ of many a time? Blogging is a wonderfully liberating experience. I would add, though, that I do so with serious intent. For, all too often, when we scratch the surface, when we stop to listen, really listen, we discover that neatly constructed charts and surveys often cover up a multitude of sins and hurts.

I say this is a complex issue that requires us to extend the concept of complex hope to partnership for social justice.

In her 2009 presidential address to the American Educational Studies Association, Hytten (2010) stated that:

Hope and community building are intimately related; that we cultivate hope in part through creating, enhancing, and sustaining relationships with others.

I say we cannot move forward to a better place around wellbeing/mental health – or confidence in special needs provision, for that matter – without families and school as allies, friends and joint-responsibility acceptors.

Returning to that definition of ‘angst’…

a feeling of deep anxiety or dread, typically an unfocused one about the human condition or the state of the world in general.

We are not in a good place with this are we? There is a feeling of deep anxiety around the mental health and wellbeing of so many of our young ones. We must accept the vulnerability that goes with this, lean into it and tackle it together.

I am very aware that this blog offers little if nothing in the way of answers. On the contrary, it raises many more questions. The question in chief being , How do we, as allies, work for a better fairer, kinder, more socially just school system… society… world?

I am with Professor Carolyn Shields:

We need leaders who are willing to look beyond the walls of their organisation to the needs, wishes, desires of their community at large, and to see how the current culture of power continues to marginalise and exclude some.

The #UKpastoralchat process is initiated with the request, Any questions? Not forgetting to include the hashtag #AskPastoralSimonFeasey

As said, we cannot do this alone. And so, Simon Feasey leaves you with this question, Any answers?

Berman, M. (1983) All that is solid melts into air: The experience of modernity. London: Verso.

6 thoughts on “Family-School-Community: Whose job is it anyway? Any Questions?… “Complex hope”… Any answers? #UKpastoralchat”