Two weeks ago the Radio 4 Book of the Week was Silence in the Age of Noise by the adventurer and philosopher Erling Kagge. I listened (available for another 15 days, as of today’s date) and also bought the book. I read the book in two sittings. I have spent a good bit of time since thinking on Silence and the messages in Kagge’s book. I set out on a walk this morning, searching for a little bit of silence. Kagge says that it was only when he understood that he had a primal need for silence that he was able to begin his search for it. I have a need. Kagge has completed the Three Poles Challenge: North Pole, South Pole, and the Summit of Mount Everest. He was the first person to reach both the North and South Poles unsupported. Not being superhuman, I settled for parking up at Clay Bank, close by ‘Chop Yat’ , and headed off…

Ironic, then, that as I walked along I felt compelled to draft this blog. I could not resist. This, courtesy of Google docs, and a signal wavering between 3G and 4G as I went. I know for sure that getting any sort of signal out there just a year or two ago was impossible. We really cannot get away even if we want to! I say ironic because Kagge urges us to set our iPhones aside as we search for that silence. Ping! A text from my mum, firming up arrangements for the weekend. Ping! BBC News app; announcing the death of Gordon Banks. More of that, later.

As I walked, I focused on relating the idea of silence to the research and work I have immersed myself in over the past few years. That work is, essentially, all about listening and conversation, and how schools work with and within their communities. Kagge talks of silence without the existence of words. He draws on the work of the ancient philosophers Aristotle and Plato who spoke of the knowledge of eternity, and with it truth, as worthless. Plato called it arrheton, ‘the unspeakable’, and Aristotle aneu logou, which means ‘without speech’ or ‘without words’. Where vocabulary ends, the two philosophers claimed, is an opening for the possibility of understanding many great truths at once. Not only the great truths but the small truths too. I reflected on how we typically seek to put things in words. For that, read ‘minutes’ and ‘action plans’, populated by key, in vogue, words. Whose language, ‘speak’, is on the page? I wonder what is lost in that? Before the written stage, whose words carry weight and whose language is being spoken? How many and which truths get lost, great and small?

Silence can also be a tool, says Kagge. The serial entrepreneur Elon Musk spoke of being someone who dwells on his own inner silence, often shutting out the world in order to open up his thoughts. He listens to a quiet space inside himself. He turns new disciplines on their heads. Musk is particularly good at using what Kagge refers to as the first principal. Instead of relying on sanctioned truths, Musk uncovers what is fundamentally true in order to reason from that basis. He disconnects from the world. He does this in opposition to the normal way of operating, which is listening to what others say is possible. Walking, I reflected on how we, as unique school communities, may raise a few questions about sanctioned truths. How can we, together, reflect on our inner silence, as communities. Turn things on their head. Hear one another. Uncover and establish what is fundamentally true about us as a community, and then identify, harness, and use the power in that.

In his book, Kagge offers the example of travelling in a car and realising you are lost. As the driver, you call for hush as you tune into what the SatNav is advising. Thus enabling you to gather your thoughts and find the right direction. A little bit of silence amongst the chaos.

In reflecting on Simon and Garfunkel’s “The Sound of Silence”, Don Saliers (William R. Cannon Distinguished Professor of Theology and Worship, Emeritus) talks of its historical context in the 1960s, its theological underpinnings, and his personal connection to the song. “Silence can be a refuge,” he says, “and silence can be a phenomenally ambiguous, difficult reality.” Saliers says that there was a lot of chaos building in the early 1960s; JFK, Martin Luther King. Of the song and its lyrics, Saliers says, “Silence is refuge. Silence is friend. It speaks of the fact that people talk a lot and don’t listen.” The song speaks of, “Unexpressed melancholy that existed underneath all the rage, and all the chaos.” Thinking on the song and reflecting on the times, Saliers says it puts him in mind of the prophet Isaiah and his saying, “People talking without speaking. People hearing without listening.”

Back to Gordon Banks, as a point of interest, and to mark the remarkable man and goalkeeper’s passing. Kagge asked a world-class footballer about his experience of noise down on the pitch, in the midst of a noisy stadium. The player replied that, in scoring, just after he has kicked the ball, he can’t hear a single noise. He lets out a ‘whoop’. He is the first to know it is a goal. Gordon Banks is famous for being the goalkeeper when England won the World Cup in 1966, and for that save, in 1970. Pele, a good friend of Banks, was interviewed. He said that as he headed the ball (that save) goalwards he was the first to know it was a goal (not in so many words but allow me some licence here) and shouted, “Goal!” Alan Mullery, also interviewed, was the England defender out jumped by Pele. Mullery heard Pele shout, “Goal!” Well, as we all know, Pele may well have experienced his moment of silence, but Banks pulled off that save. Watching it again, you have to say, What a header! The leap! The power! And yes, What a save!

There is so much more in Erling Kagge’s stuff but I really do think you should explore it for yourself and relate it to your inner silence. I urge you to do so. It is well worth investing your time plus £6 and a bit.

As I walked today, I reflected, too, on heading out that way with our weekend walking group – made up of children, parents and teachers. It was one of my favourite days. We walked all the way from Clay Bank to the Lion Inn at Blakey. Orange juice and chips for the children, beer (Theakston Old Peculiar, on draught) and chips for us older young ones. A happy chaos in the beer garden, with a very real absence of silence! A lovely way to get to know one another, share good news, and say what is currently rattling our cages.

Midway through my walk today I yomped up Ingleby Incline.

This is where wagons travelled down from the tops of the moors, having made their way from the ironstone mines at Rosedale, on their way to the open jaws of the ravenous furnaces that used to line the Tees in and around Middlesbrough. A sight commented on by Gladstone in 1862, thus

This remarkable place, the youngest child of England’s enterprise, is an infant, but if an infant, an infant Hercules

Middlesbrough, ‘Ironopolis’, bestowed upon itself the motto, Erimus, We Shall Be. 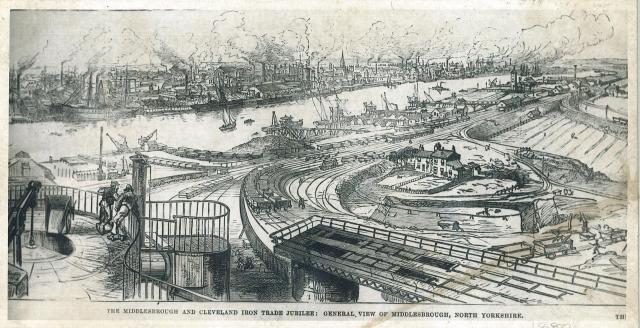 What do we dare to be? I work with school communities in exploring just that. And yes, I would say that we do explore that collective inner silence. We search for the formerly ‘unspeakable’ (arrheton) so that we might unearth fundamental truths and work from there, invoking activism and seeking local solutions. We clear a space, away from the chaos. A space where silence is a friend, a refuge; a listening space, a space to be.

I would very much welcome contact from anybody who dares to walk this walk with your community, asking, What shall we be? If an infant, an infant Hercules… pursuing outrageous possibilities, together.